Archibald Knox and his Design 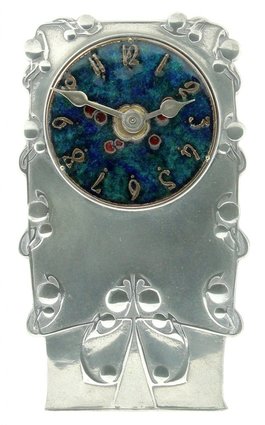 Archibald Knox was born in the year 1864 in the Isle of Man. Although being Manx by birth, he had a Scottish descent, and this origin would have an important aesthetical influence in his designs, inasmuch many of them feature the characteristic disciplined and sober traces of the North. Archibald would become an exceptionally important designer to the Arts & Crafts and Art Nouveau movements, leaving his indelible mark across the design field, from the decorative arts to jewellery.

Knox studied at the new Douglas School of Art, in the Isle of Man, between 1878 and 1884 (where he also began to teach, following a very early invitation while still a student), a school which rapidly became known for its bold and innovative approach to the arts, thus providing its students with avant-garde concepts and knowledge and equipping them to point the way with artistic turns and breakthroughs. In the late 19th century, he finally left to London, where he was fortunate enough to play an assistant role in the famous Christopher Dresser studios, just before he was invited to teach at Redhill and Kingston; and then he started working for the Silver Studio, which we can say would be his gateway to stardom, as it was there he started to collaborate with Liberty.

The Celtic and Runic styles were Knox’s conceptual foundation; in fact, the final exam of his studies was based, of course, in Celtic design, following a life of growing and studying in this Celtic haven that was the Isle of Man. So, when Arthur Lasenby Liberty, the founder of Liberty Department Store, gave his lecture “Pewter and the Revival of its Use” to the Society of Arts in 1904, he already had a very clear mind about the person who was, at a global level, leading the proposed Celtic revival movement: Archibald Knox. By the time, Knox was already the most outstanding designer collaborating with the company and, from this point on, he would actually become an international landmark of the Celtic revival through Art Nouveau designs. Archibald was an artist at heart, and he always managed to create innovative and unexpected Art Nouveau designs, through which the ancient Celtic soul flowed like a quiet river.

For Liberty, he created the world-renowned Cymric and Tudric wares, the latter being a quality pewter-ware, destined to mass production, with lower prices than the Cymric range, based in silver and gold metals. In this way, Liberty made the Celtic revival designs more accessible to every home and was able to exponentially increase production. Still in the Silver Studio, he produced his first jewellery designs and later went on to independently furnish Liberty and other brands with his jewellery and decorative designs, after having returned to the Isle of Man. Now working remotely as an independent designer, he continued to produce thousands of original designs, crossing all the way from the more intricate to the most simple, and even touching abstractionism – there are records of botanical abstract designs produced by Knox for fabric and wallpaper, which were never put into production because they were so ahead of their time.

Today, Archibald Knox’s designs are extremely sought after, even at times when the market seems to show a lesser interest for the Art Nouveau period. The clocks and jewellery pieces are usually those which spark special interest with collectors, amongst other special items. A rare or unique Knox clock can sell for as much as $40,000, and single jewellery items have been sold for over $3,000. But special Cymric range pieces are those who hold the records, fetching over $150,000. Still, don’t worry, if you’re looking to start collecting Archibald Knox designs, there is always the Tudric range, in which you can still find some very interesting designs below $500 – now is the time to buy, so hurry up!

Sign up for design inspiration, artist profiles and our weekly overview of new editions...
You may also like...
Maison Denière
André Delatte
Franz Xaver Messerschmidt <br/> (1736-1783)