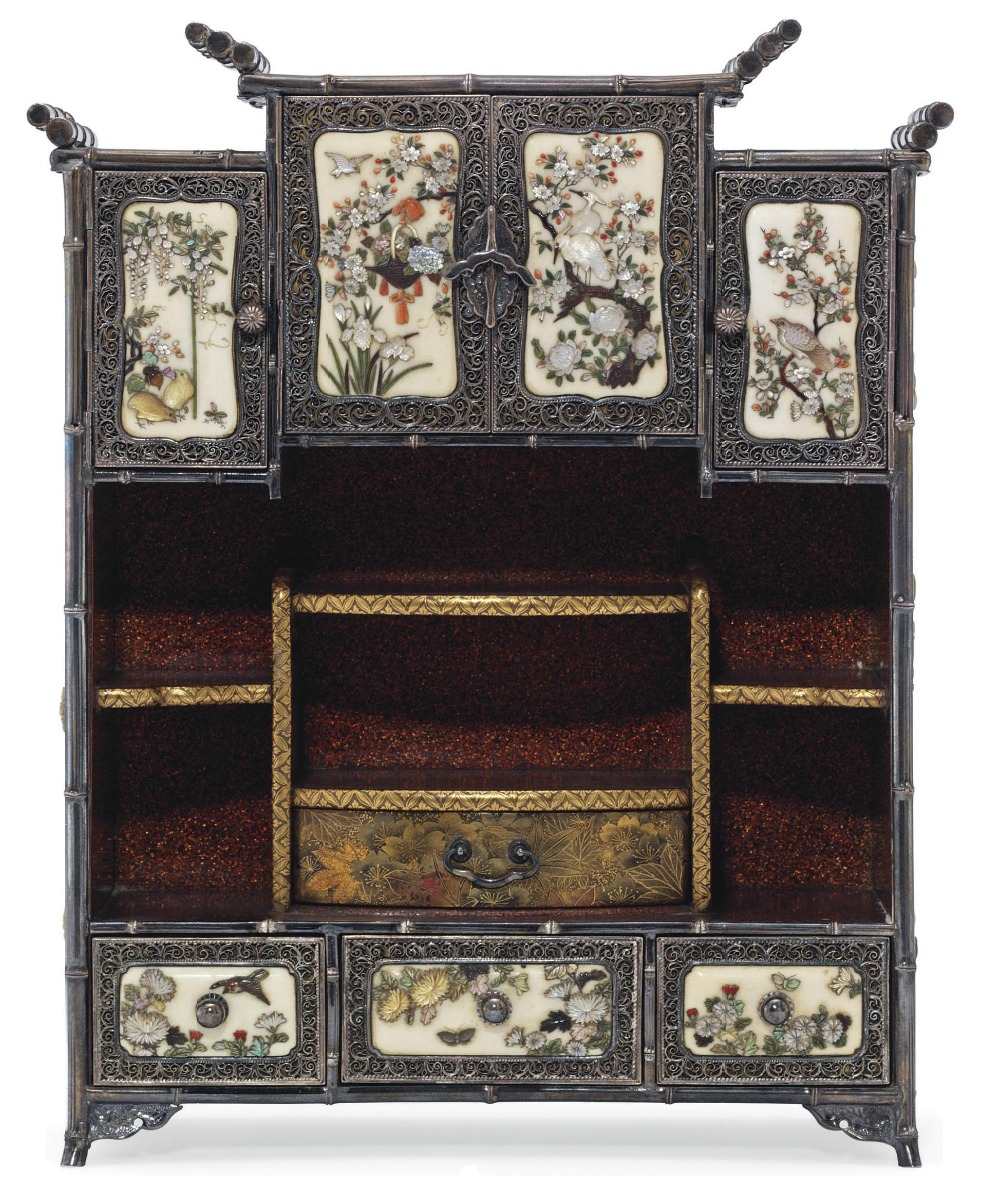 The shibayama zogan (inlay), as it is known amongst the Japanese, is an art technique consisting of incrusting diverse source materials into a ground base material, particularly, Japanese lacquer. The technique is often mentioned as being an artistic achievement of the Meiji Period in the second half of the 19th century; however, this is not true, as its origins can be traced to almost 100 years earlier, in the late 18th century Edo Period. During the Meiji era, the technique had fully been perfected, and the shibayama style reached its highest degree of commercial development. The shibayama decorated pieces gained additional recognition, resulting in a large number of exhibitions displaying both the older and newer items, especially outside of Japan. Beginning with the Exposition Universelle à Paris in 1867, the western world came to love this new oriental artistic style and inevitably a boom trade followed.

What are these treasures are made of?

The technique took its name from a family of craftsmen, the Shibayama, who began to imprint a new type of decoration to traditional Japanese objects and furniture, in the later part of the 1700’s. Of the most famous among these objects was the inro (a small decorative container), which was then encrusted with several types of different materials, or, less commonly, with only one or two. Wood and lacquered wood are thought to have been the debut ground material for shibayama artists, but soon the technique spread also to the ivory medium. Precious metals, horns, ivory, corals, seashells, tortoiseshell, hardstones, mother-of-pearl, exotic woods and other luxurious materials were used to give a colourful, elegant or exuberant look to everyday and costume objects, with depictions of floral patterns, beautiful animals, landscapes or social motifs.

As production increased and the 19th century unfolded, the Japanese became aware of the enormous buzz these objects were causing in the west, and the shibayama inlays started to be made for the export market and according to the taste of westerners. Nowadays, we are under the impression that addiction for the shibayama items actually never stopped, and, in the 21st century, it is still a hugely popular collecting field.

The majority of shibayama items are signed by the artist, and this is an important feature for the collector. To have an object signed by one of the original Shibayama family lineage members is nothing but a dream for most of us, but there are also pieces later made by their followers which are superb and of outstanding craftsmanship. The founder was Onogi Senzo, who later changed his last name to the name of the city where he worked, Shibayama. He went further to create the Shibayama School, from where many skillful artists emerged, like Ekiso or Nakayama. The Ozeki Company is another very well known shibayama source as a retailer, and pieces like vases or other vessels bearing their seal are extremely sought after, fetching several thousand dollars at auctions worldwide.

What to look for when buying?

We would say that the value of a shibayama piece is mainly dependent on quality, complexity and signature, however, issues such as condition or restoration must also be considered. Our advice is to carefully look for quality pieces in good condition, from the lesser known artisans, as the famous makes are getting terribly expensive (inro with the seal of Nakayama are selling for $15,000 +); in the shibayama field there is still much to be studied and discovered, and we never know when suddenly a quality piece may multiply by several times its purchase value in a short period of time.

Sign up for design inspiration, artist profiles and our weekly overview of new editions...
You may also like...
Antiques Guide
Wedgwood Jasperware
Art Deco