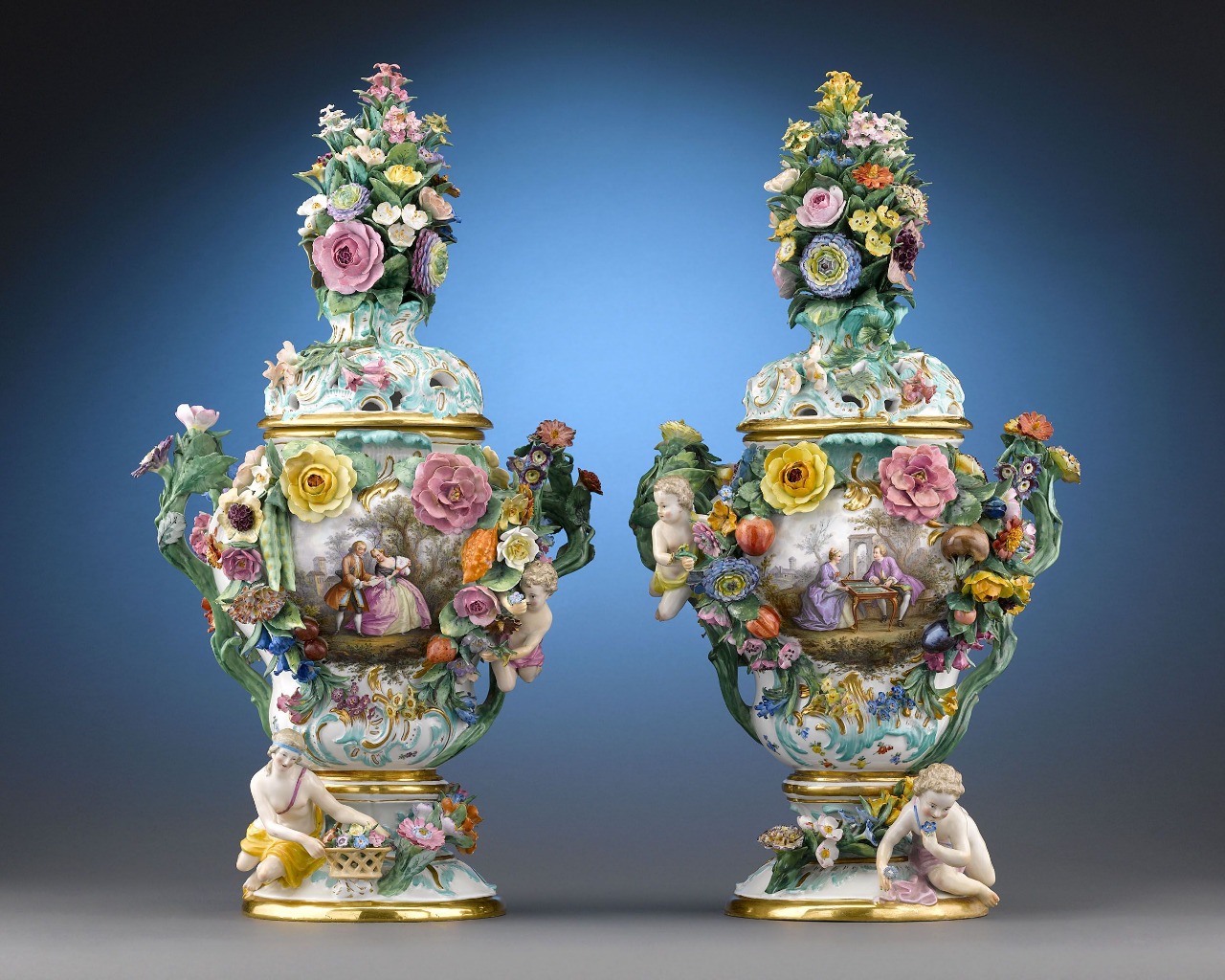 For many enthusiasts of antique porcelain, the Meissen factory is the highest standard ever achieved for a type of porcelain made in Europe (as opposed to the porcelain made in China, starting several centuries earlier). The discovery of the Arcanum to make this “pure white gold” was made by alchemist Johann Friedrich Böttger in the early 18th century (1709), following extensive research by Ehrenfried Walther von Tschirnhaus, permitting the establishment of the Meissen factory in 1710, under the patronage of Augustus, the Strong. There are many features which have made Meissen porcelain worldwide famous through the centuries and of the most preeminent, undoubtedly, its botanical paintings and floral designs.

The first botanical motifs in Meissen porcelain were directly inspired by oriental ceramics, in particular the Japanese kakiemon style, a type of decoration well suited to favor the visibility of the new European porcelain’s pure white body, as the motifs were designed to be sparsely distributed onto the item’s surface, thus letting the porcelain shine. Interestingly, this also means the inauguration of botanical painting on porcelain in Europe was, in fact, an early form of japonisme, which was given the name of indianische blumen, a German term to refer to “oriental flowers”.

The great enabler to this new style of presenting porcelain items was master-drawer Johann Gregorius Höroldt (1696-1775), who arrived at Meissen in 1720, and basically took over responsibility over the whole design policy of the factory, with endorsement from the king himself. He was given the liberty to create and decide, but he was also enlightened enough to create a workshop system benefitting the rest of the painters, allowing them to learn and to copy his paintings and designs. There was much to be discovered and invented in the new field of painting porcelain, and that is exactly what Höroldt did: he invented sixteen new enamels specifically engineered for that purpose, all of which are still in use today.

Keeping Up With the Trends - Innovating the New Collection

By 1730 there began to occur a shift of taste in Europe, regarding the type of decoration people preferred to find on a piece of porcelain. The taste for oriental-inspired motifs had faded, and society decided it wanted to see more continental decoration, which of course was closer to what was experienced in European everyday life. Höroldt’s Asian imagery was being left behind, as the factory became committed in finding sources for fresh and innovative patterns, with the capacity to catch the eye of potential buyers.

One of the influences for the newer patterns was the naturalistic decoration on earlier Germanic glass items, the other was prints and engravings; there was always a close relation between Meissen porcelain and antique prints (for inspiration), and so the factory eventually turned its attention to the more scientific European engravings of botanical interest, like the drawings with representations of the natural world in the Archetypa, originally published in 1592. An important addition in order to address this new challenge was the appearance of a few exceptionally talented enamellers, of which perhaps the most relevant was Johann Gottfried Klinger, who worked at the factory between 1726 and 1746.

But this newly established, European-centered artistic appetite was also calling for a different type of porcelain modelling, one that could instill a new three-dimensional dynamics into the factory production, while bringing out the best of the most fashionable artistic trend at the time, Rococo.

Luckily, the decay of Höroldt’s influence at the Meissen works coincided with the arrival of someone who would, again, change the game in their favour: Johann Joachim Kaendler. He started to work there in 1731 and immediately his effect was felt across the entire production, including, of course, the marvelous flowers, beginning to be modelled in a beautiful rococo style, mostly as appliqués of flowering tendrils, incrusted into the porcelain’s surface, or as magnificent blossoms decorating special figural pieces.

Kaendler worked very closely with modellers Peter Reinicke and Johann Friedrich Eberlein, and together they produced some of the most inspiring and breathtaking floral designs in the history of porcelain, including the fabulous and sought-after Meissen “snowball” designs, incrusted with hundreds of tiny flowers. Kaendler’s influence was so important at Meissen that in the end of the 19th century the factory was still frequently producing items after his work.

Meissen porcelain floral models and paintings from the 1730’s and 40’s achieved a reputation that echoed all over Europe, with the deutsche blumen style replacing the previous one, in the aforementioned shift from oriental to European motifs, while embracing the new rococo trend. This was copied by many factories across the old continent, namely in England, France, Austria and Germany, with Meissen being the landmark for hundreds of porcelain producers. Today it is very hard to catch an early Meissen floral piece, but the 19th century also brought exceptional quality items from the factory, if you’re on a budget.

Sign up for design inspiration, artist profiles and our weekly overview of new editions...
You may also like...
History of Furniture: Cabinets
Wedgwood Jasperware
Franz Xaver Messerschmidt <br/> (1736-1783)